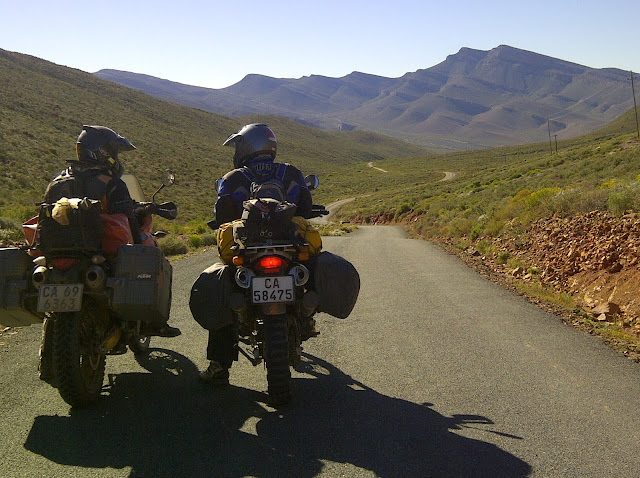 PLEASE NOTE:
Jinx has posted this (and the next posts from the same trip) on her personal blog before - Biking2Nowhere - As we did the trip together we would like to share it again, maybe just not so much from her point of view only. Skip if you have seen it before, enjoy if you have not!

First of all we want to apologize for all the pics of the first few days' posts. We are 3 people with a variety of devices for capturing awesomeness! We have brought them down from almost 1000 to 50. We promise to lessen the pics as the days go by.

Wow! What a day - with tons of mixed feelings!! Doing some last minute needlework till 1am was not quite in Jinx's planning, but if things suddenly don't work, what’s a girl gotta do?!
On the other hand, were it any other capable woman, the job would have taken half an hour and not two and a half hours!! Then again, give her a bike and some dirt roads rather than a needle and thread! Although being awake since 5.30am we did not get away till 8.30! All thanks to her, of course. Once again packing and repacking, then not finding things and then having to get loaded and all the different luggage arrangements. Sighhh…
Toni and Jinx slept over at Abie’s, so that we could all leave together and get an early start – we hoped! 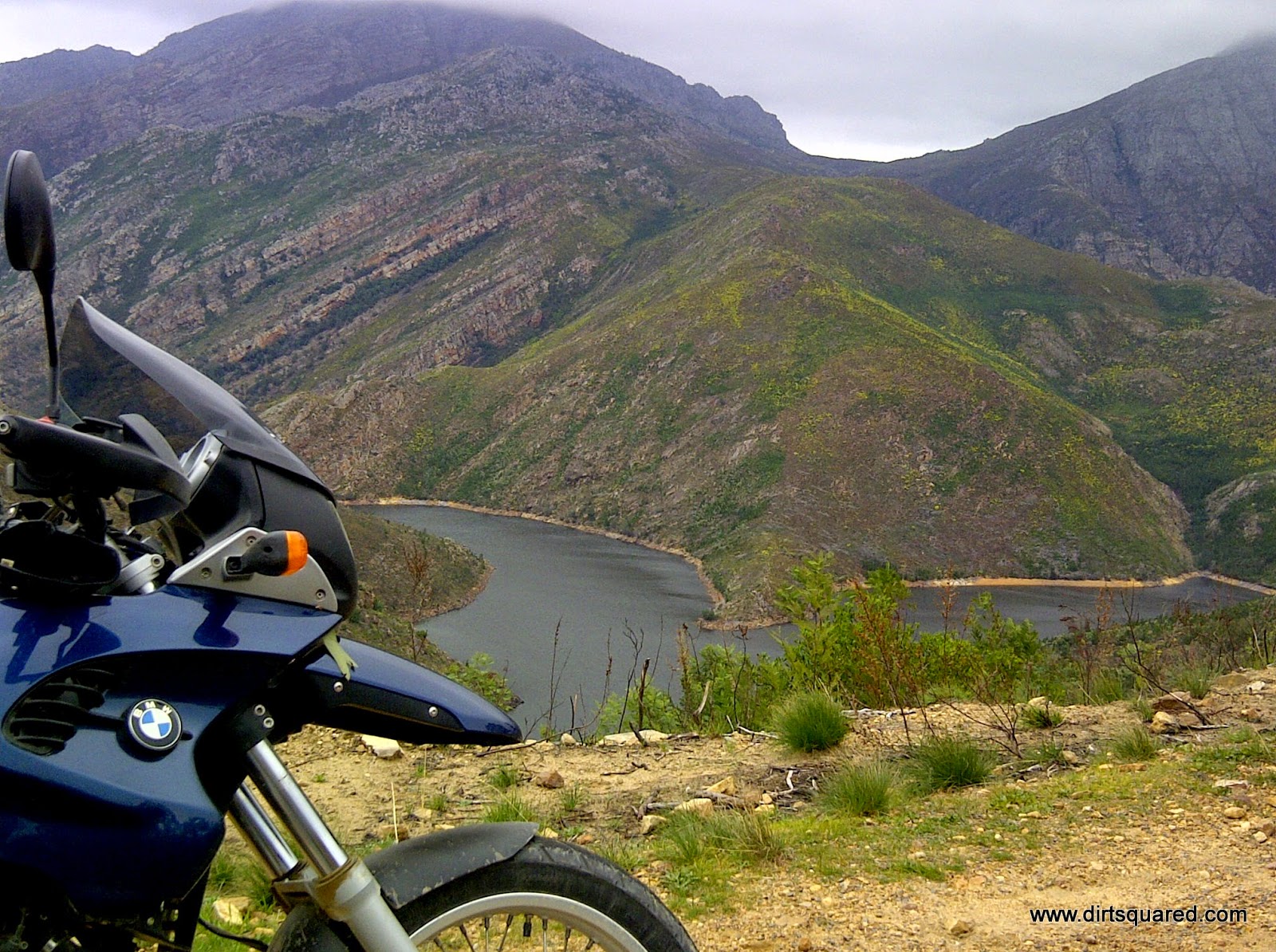 We set off on a heavily overcast day, determined not to let the weather get us down. Meeting halfway, Villiersdorp seemed the ideal place, as it’s surrounded by mountains, dams and forests. 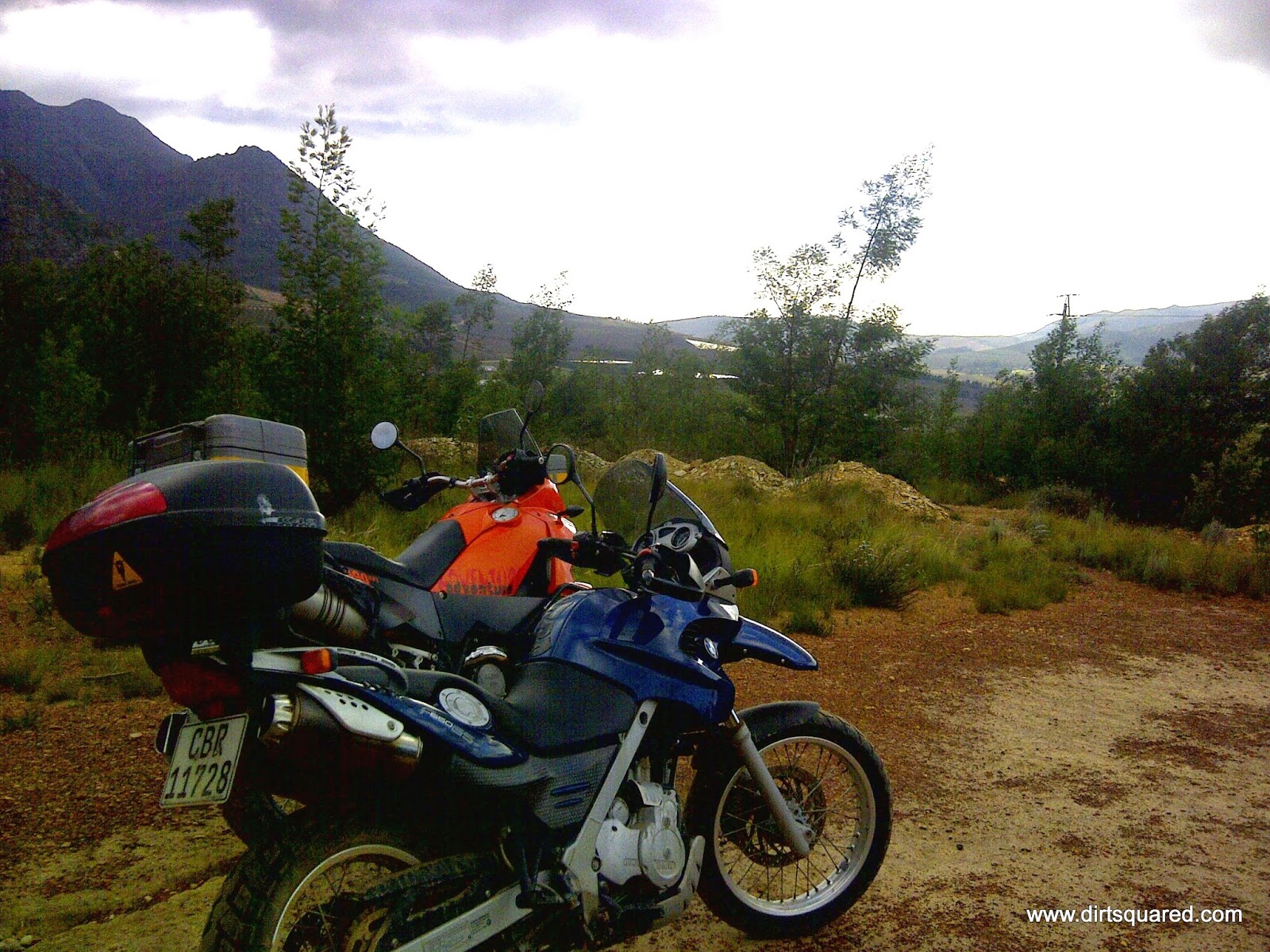 How it all begun ... Our first trip together 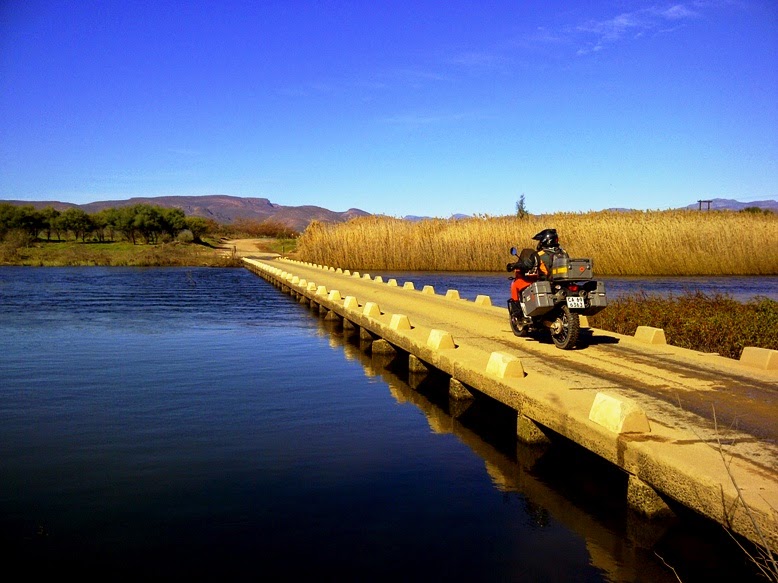 I had an incredible weekend. We literally spent all weekend (except nights) on our bikes! Met up for the first time with a new friend from  who was not afraid to spend all day on a bike and we criss-crossed mountains, valleys, rivers and roads till we were totally knackered! How I love discovering the awesomeness right at my back door?! 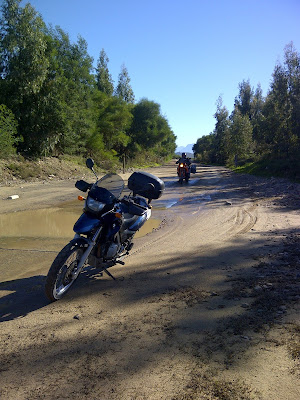 My friend’s planned trip for  fell through the mat at the last moment. He was invited to come to us for the weekend, knowing I would be delighted having my bum in the saddle as much as possible! Early Saturday morn I met him halfway and we hit the dirt roads shortly after that. He is a short Italian guy, but rides one of the highest bikes in the business – yeah, don't ask! In spite of this, he is a good rider and our riding complimented each other. 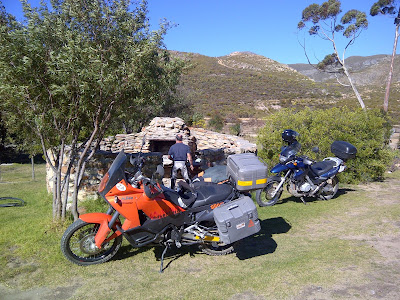 We took the turn-off opposite the Aan De Doorns road and skirted the foot of the mountains along the Nuy Valley till we came out at the Rooiberg cellar. We back tracked a few kilometres on tar and then headed into the mountains on the opposite side of the the tar road.

Through vast vineyards, mountains and large horse farms we made our way to McGregor, where we had a picnic lunch at the furthest point you could go if you head straight through the town and up the mountain on the other side. The howling wind forced us into a quaint circular wall where we tried eating and drinking without being blown away. 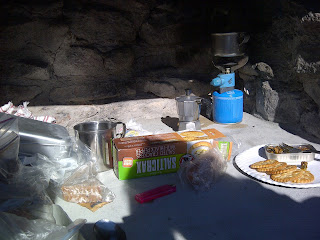 Some Proteas had started coming out and the hillsides were covered under their magnificence! 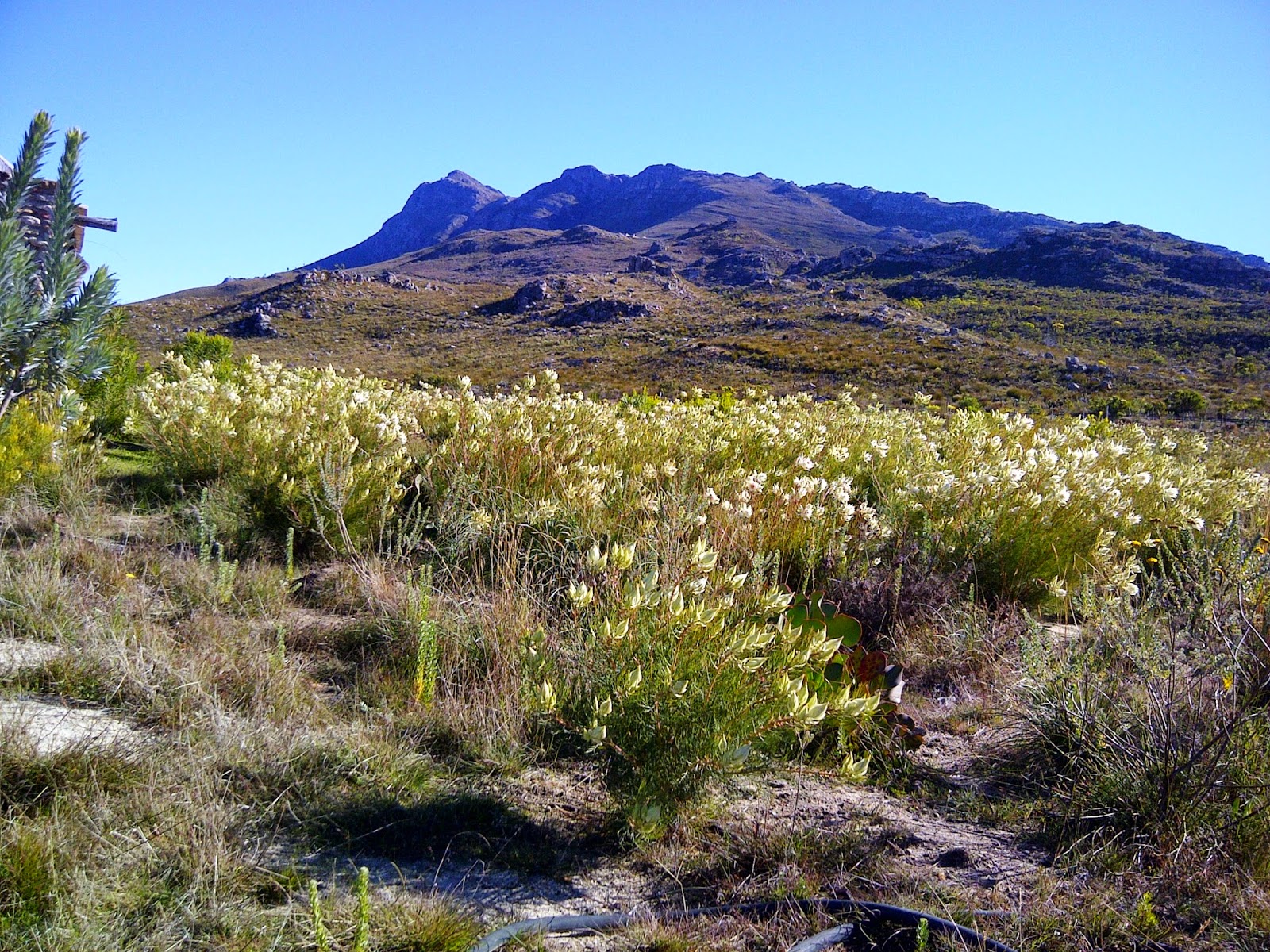 We headed back and made a quick stop at Eseltjiesrus, a donkey sanctuary for old and mistreated donkeys. Then headed over an awesome mountain pass to end up in Bonnievale, where we headed back home to arrive just as the sun was setting. 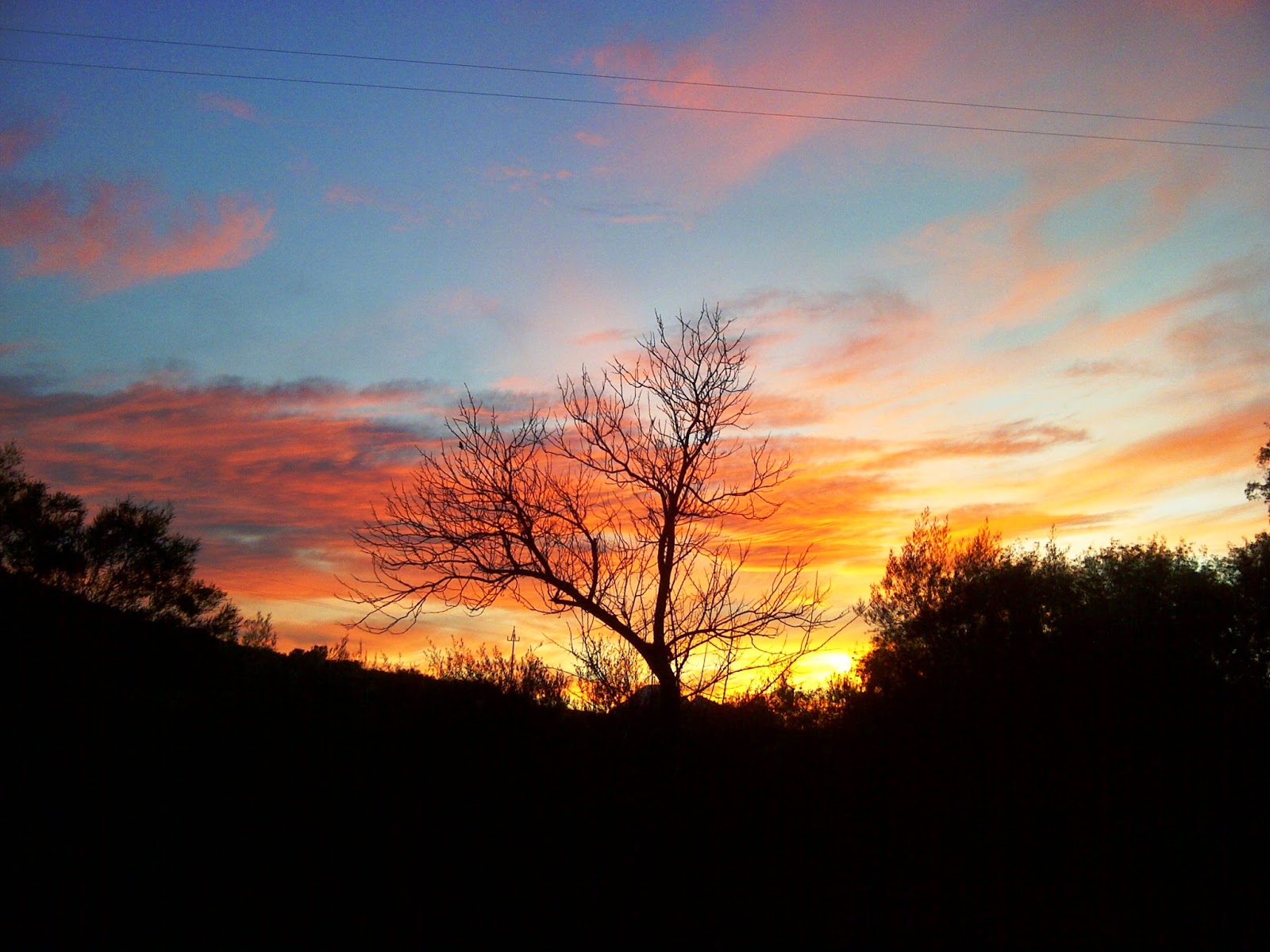 Early the next day we headed out through a private farm on a 4x4 track - directly over a mountain to join the Ouberg Pass once down from that mountain. One of the nicest surprises was high up in the mountains, I took an unfamiliar turn and by the time we spluttered and spurted to the top, we had not only the most awesome view, but something else… 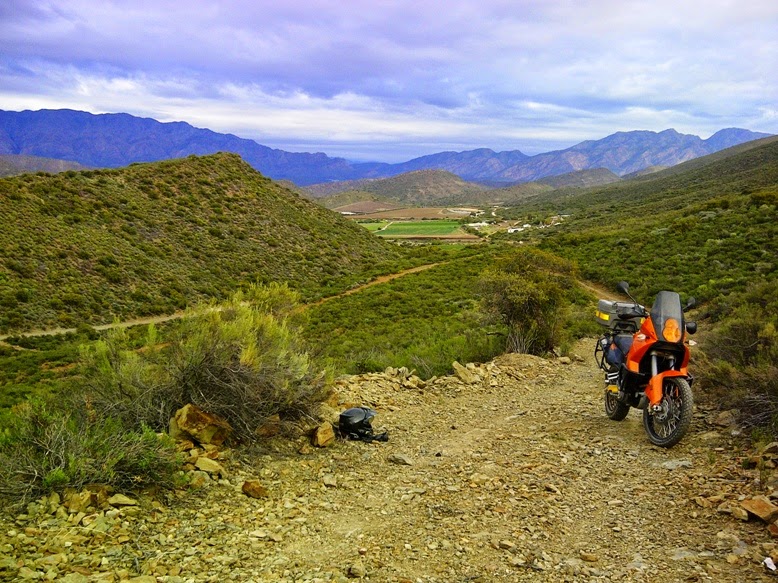 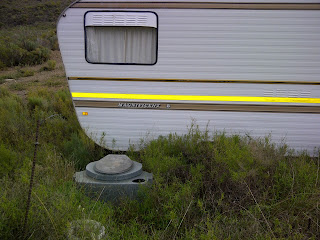 A caravan was perched on top of the hill – must probably have been brought in by air, cause I cannot see it ever using that road to get to the top?!? There was even a “flush” toilet, a big bath (Toni climbed in for a nice pic!), kitchen and “swimming pool” outside. 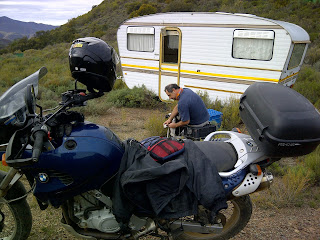 We made use of the crates and had some coffee (he makes espresso and brings all the necessary things along!), while absorbing the magnificence I call home! A bit earlier, while going up a very steep and technical climb, he was in the wrong gear. The bike stalled and they both ended in the gravel! No damage to the bike, his calf got hurt but I believe the ego probably took the worst beating. First trip with a girl and he's biting the dust, so to speak. It did not faze me, as such a kind of fall is very common. BUT… 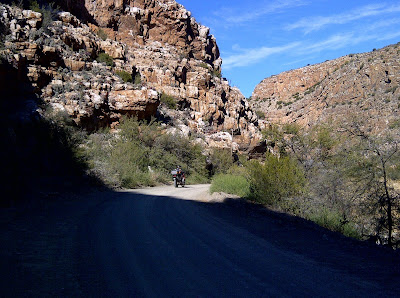 It was less than an hour’s riding further when we came round a bend (albeit a bit too fast) to see a flooded river. I slammed on brakes and skidded in sideways and at the last moment managed to turn the bike and hit the water well and slow. I think he was trying to catch up and was going way faster. Also ploughed in sideways, got the bike’s nose in first but had a shower of epic proportions!! 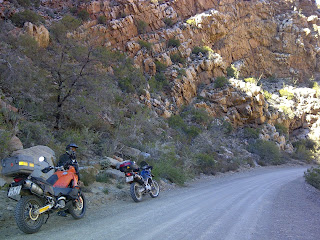 From his underwear (he told me, not from personal inspection!!) to the socks in his water resistant knee-high boots were drenched. Remember it is dead of winter here, and the sun had hardly stuck its rays out from under the cool and overcast day. 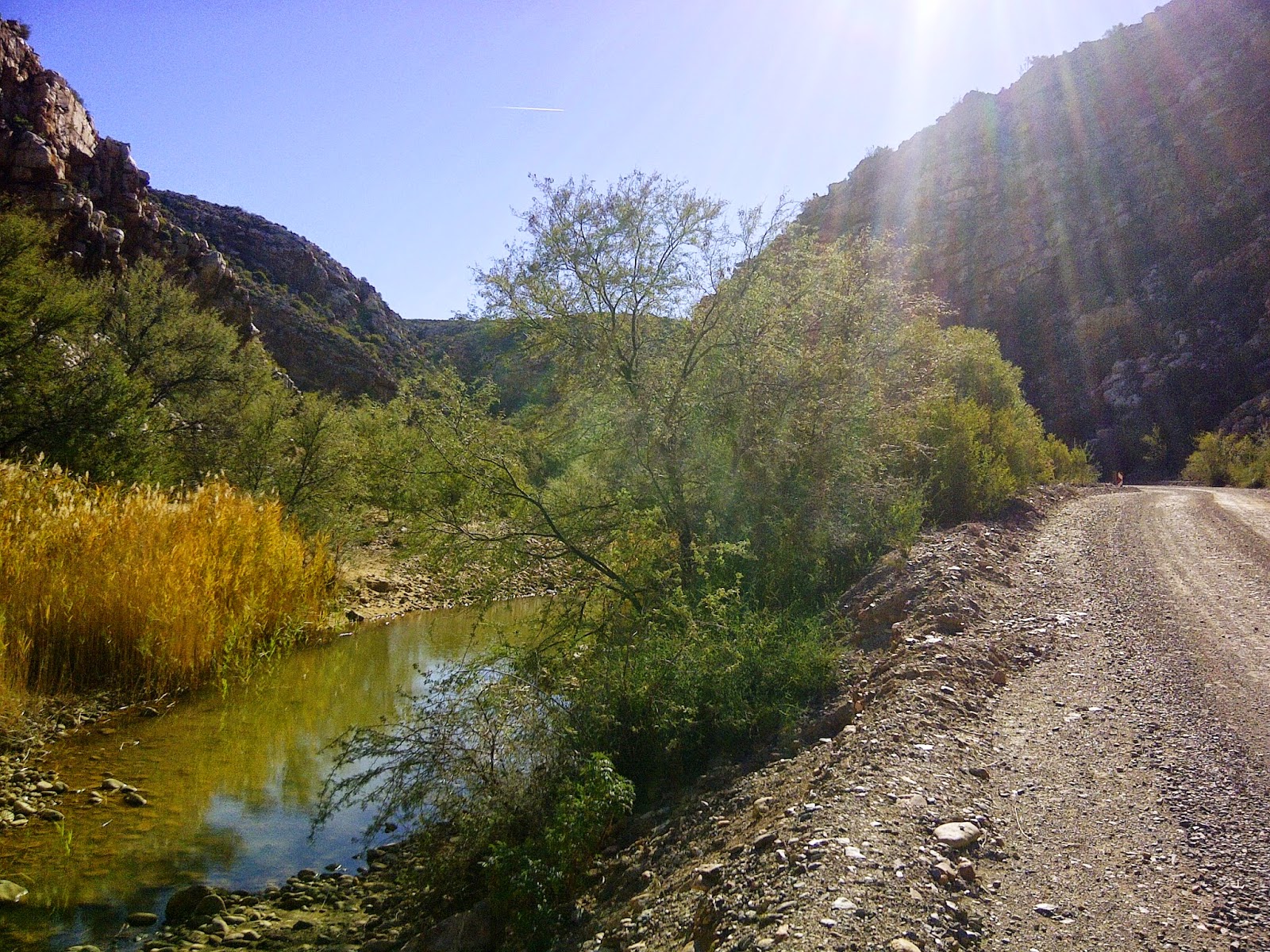 By the time we stopped for lunch, the poor little Italian was fairly frozen, so we climbed up some rocks, dragged the stove, sandwiches and everything needed to a spot where the sun crept through the crevices of the high rock face we were riding through. Baking like lazy lizards, we enjoyed the winter sun and contemplated the beauty of the country we live in. 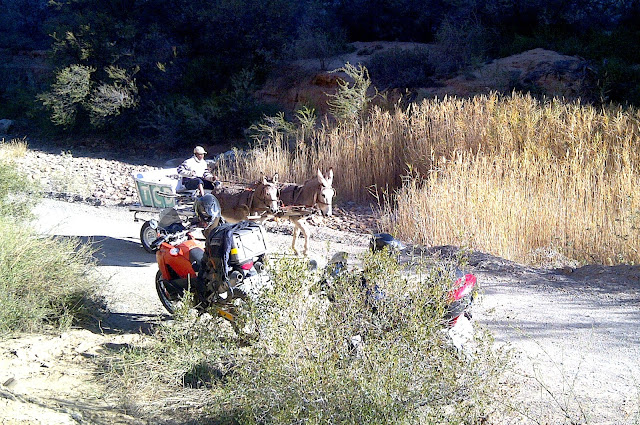 Just as we finished, a donkey cart came past with a local – probably from church. What a thrill. 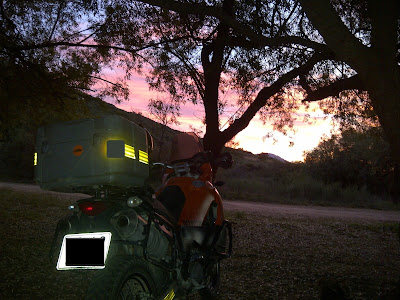 We ended our last day riding into the most spectacular sunset. We are blessed – We truly are! 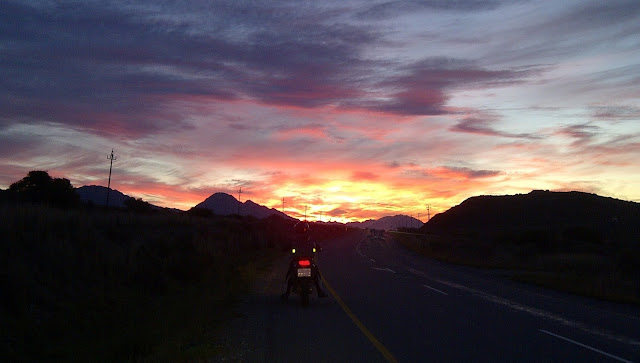 Posted by Unknown at 1:53 pm No comments: