After a wonderful rest thanks to Bianca, we left on a balmy but cool morning. Days of difficult off-road conditions actually made me enjoy the tar road. – Yes, I know I would never let THAT come out of my mouth, but I have had a few days to reconsider my riding skills and nearly-near-death-experiences and cannot help wondering if I am way more of a sissy than I thought.

The outskirts of  were beautiful and I was surprised at how mountainous the area was. Obviously it also had more rain than the area we had been in over the last few days, as the vegetation was greener and denser too.
We made good time on the tar and once again I have only praise for our F4 interphone that allows us to communicate while riding. It has been such a big help to foresee problems, where to go or stop and even some general banter. 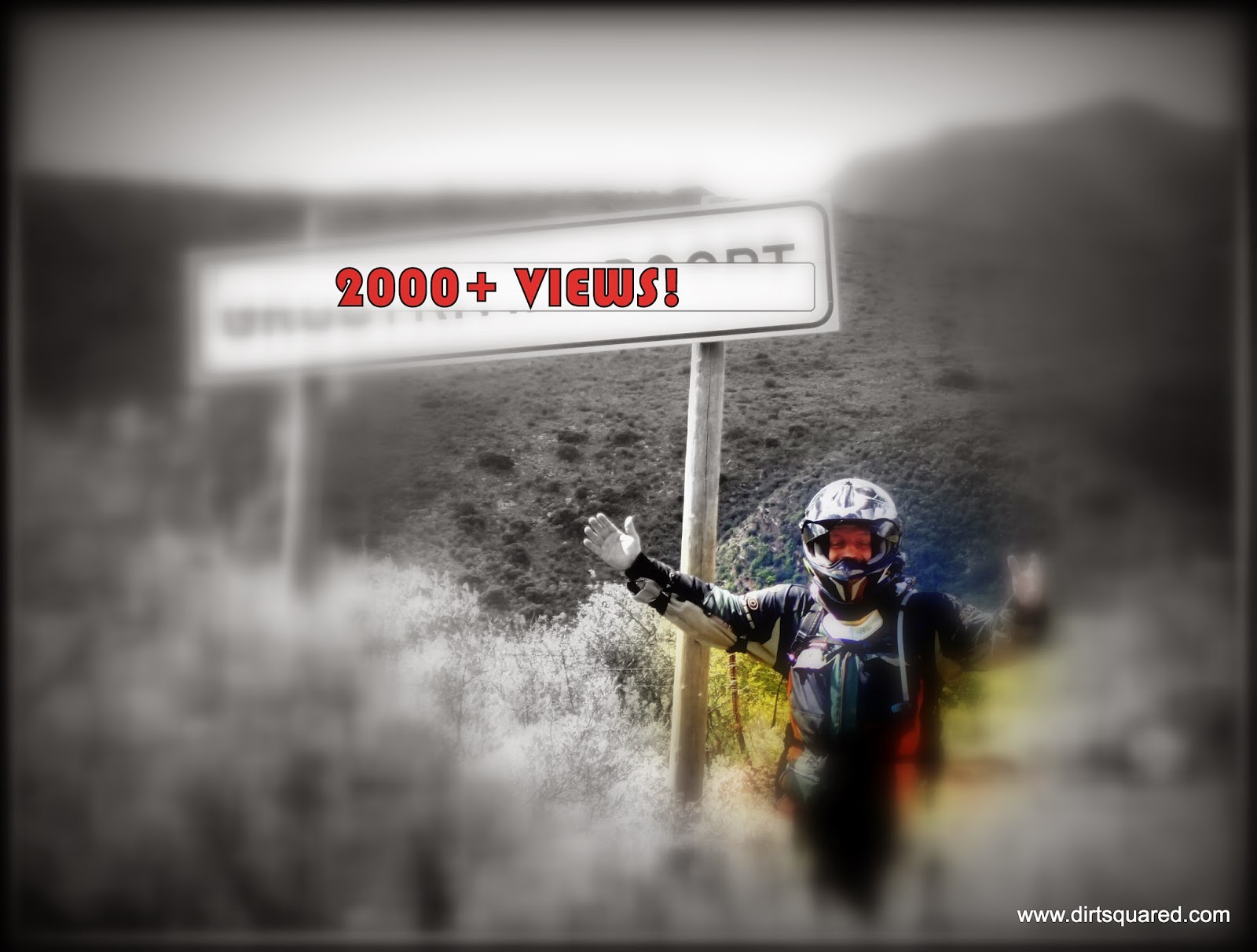 Just over 2000 Blog Views in just over (our first) month!

Thank you so much Blogville! We could not have done this without you. Thanks for the complimentary compliments, all the + 1’s and most of all, for coming back time and again!

We love what we do and are stoked that we have the backing and support from so many of you. Although travelling costs money and our biggest constraint is time, we will try and bring you as much as possible.

The first exiting news is that we are going to host a guest blogger once a month. Someone who has inspired us, maybe a great blogger that has caught our attention or someone that has a great way with words and pics and LIVING THE DREAM. Please feel free to contact us PRIVATELY if you would like us to host you. The possibility is there that we might have missed your great blog somehow and we’d love to give you the exposure it deserves.

Thanks again to all of you who supports us! We really appreciate it!
Toni & Jinx

Posted by Unknown at 4:50 pm No comments:

Email ThisBlogThis!Share to TwitterShare to FacebookShare to Pinterest
Labels: Doing well, Our THANKS!, Target Blog views 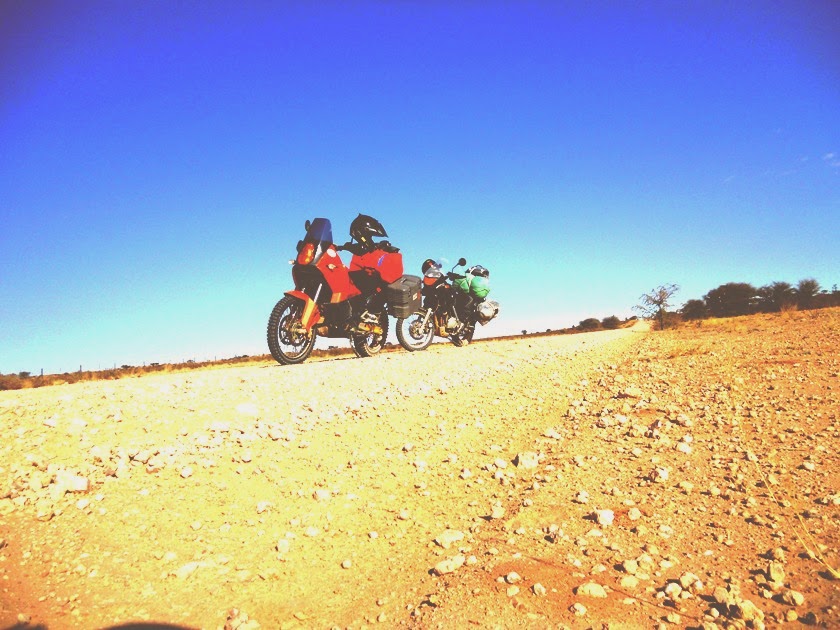 Please vote on our poll - top right of the blog.
Once again a lovely sunrise. Although a distant rooster was determined to wake up the district before 4am! Or no wait! Jinx was already awake! Absolutely freezing to death through most of the early hours of the morning, she could not help but notice the farm noises from early morning. 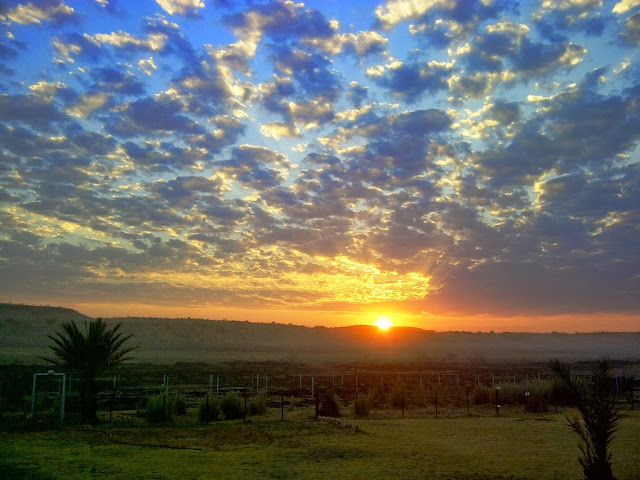 The tents were up right next to a camp full of cattle and when we started pitching them the previous night, we had an audience come closer to investigate and then do a thorough inspection once we were done. 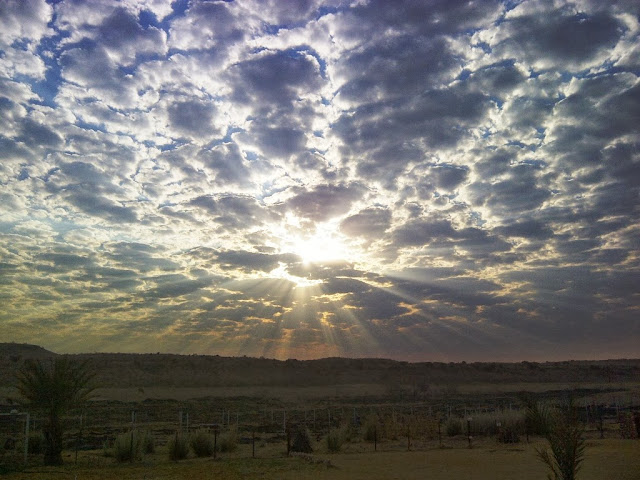 Getting away later than planned, we hit the road only around 10.30. We had been told that except for the first 65 kms the rest of the road had been tarred, thus no need to rush or get away early. We met a very interesting man at our campsite. Koos Van der Berg has taken a year off from work to write a book. After heart problems, he decided to hit the road, with a (very heavy) rucksack, his laptop and his own thoughts. He has walked through large parts of  and lost 20kg since he started. We spent quite a while chatting to him and found him immensely interesting! Be on the look out for his book! 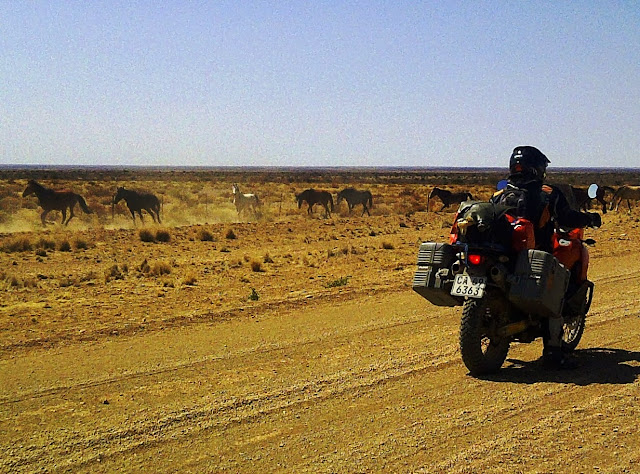 We were up early enough to enjoy a spectacular sunrise. 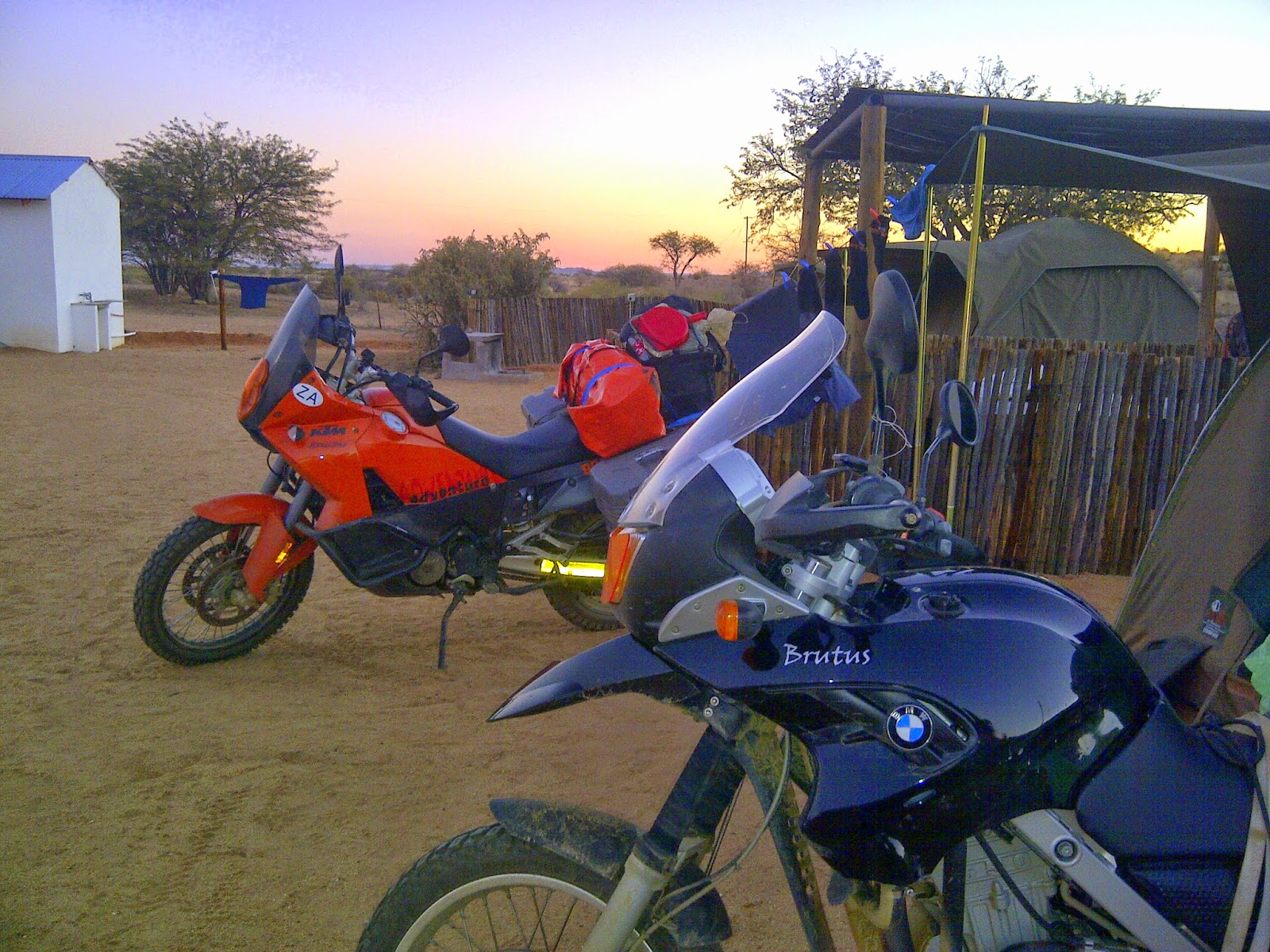 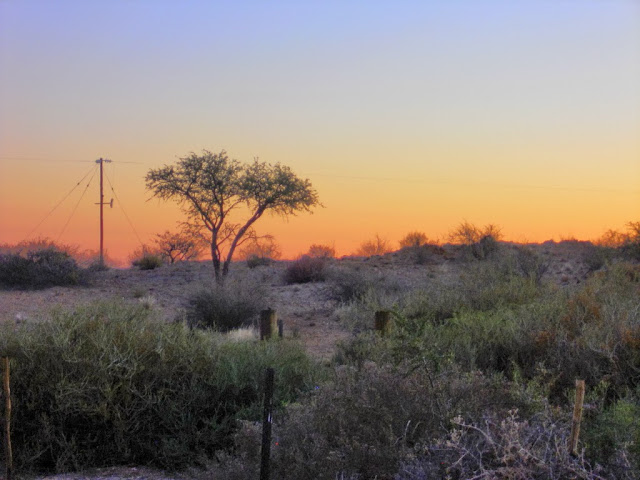 Although a cold night, we slept warm and woke to birds singing and a red sun rising in the distance.


We met up with Nic at the White house and left around 8.30. Not having anything to eat or drink, we had a picnic on the way just before Keetmanshoop. 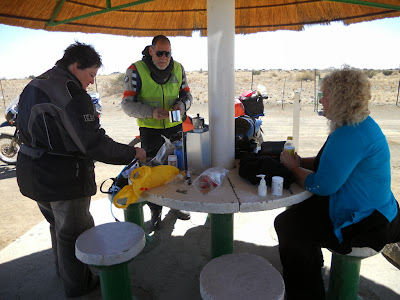 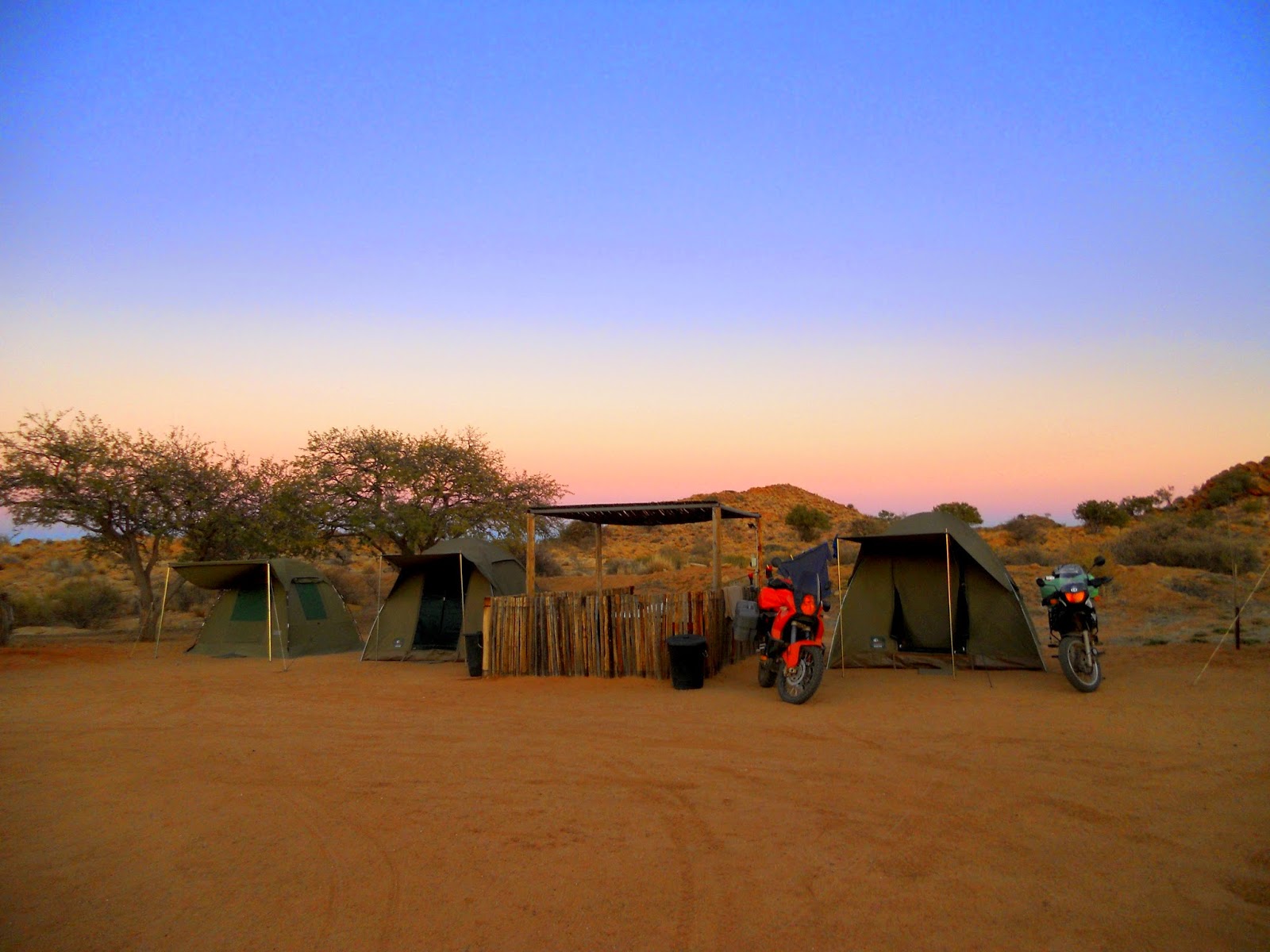 Please vote on our poll, top right of the page. 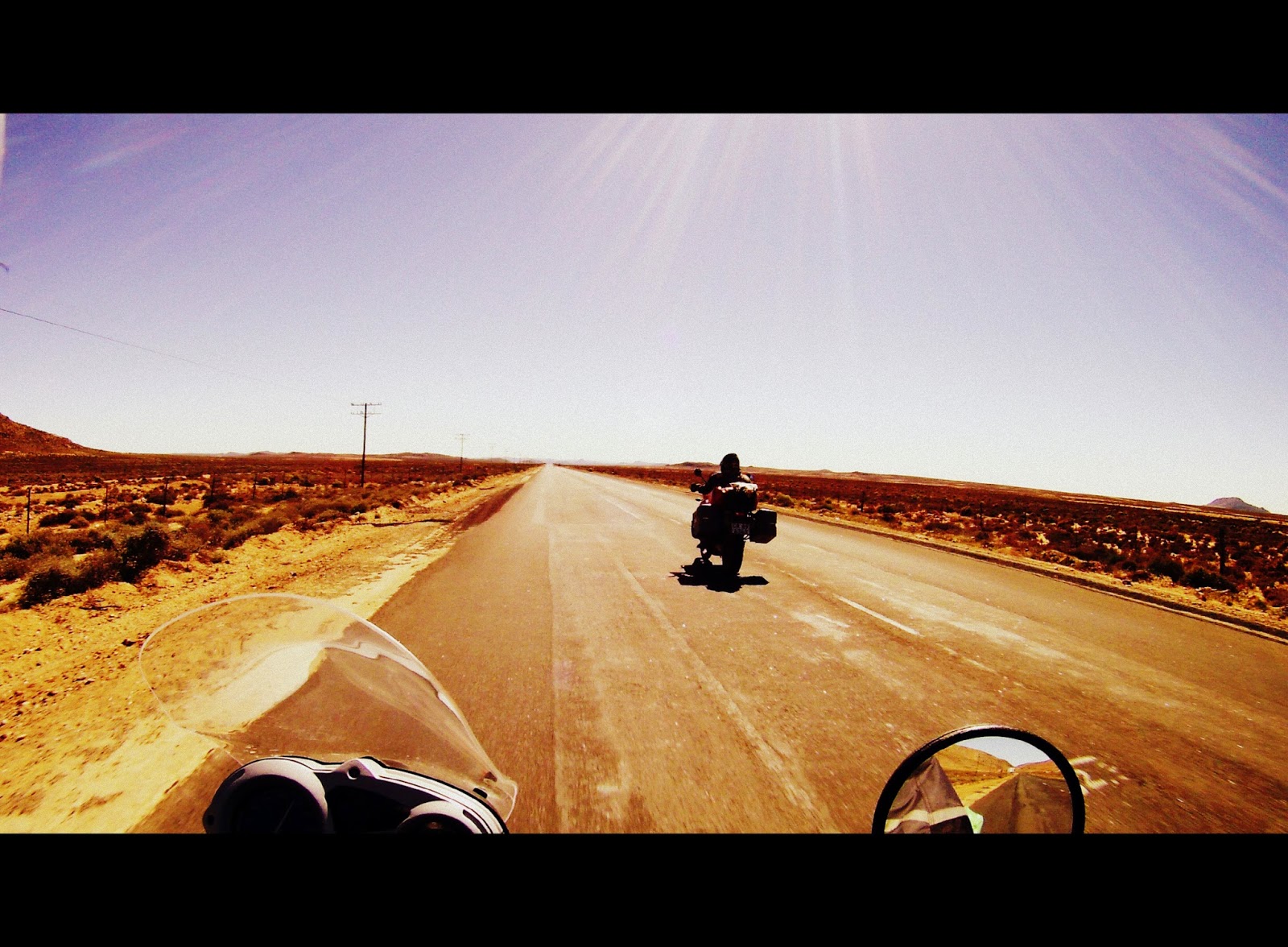 Today has been the most frustrating day of our trip so far!  Something went wrong with the limited power supply we had at the Backpackers and Jinx left without being able to put on the helmet cam.

We had forgotten how mountainous the area was - and exceptionally green!

Email ThisBlogThis!Share to TwitterShare to FacebookShare to Pinterest
Labels: Namibia

After a cup of coffee, we left just after 8 and found ourselves at a deep river crossing. Abie was on the other side already, so who were we to be chicken??
Read more »
Posted by Unknown at 6:07 pm 2 comments: