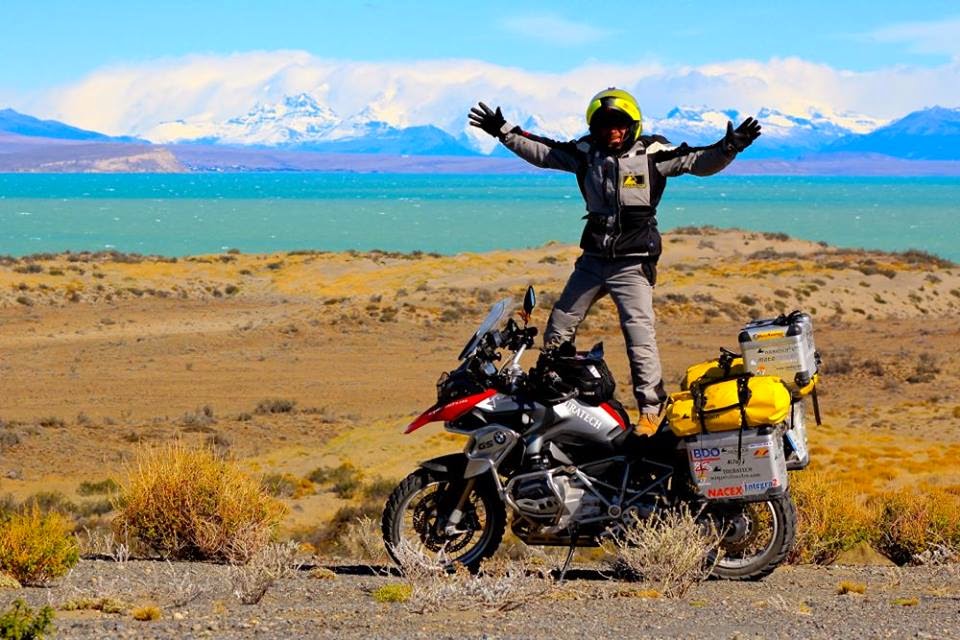 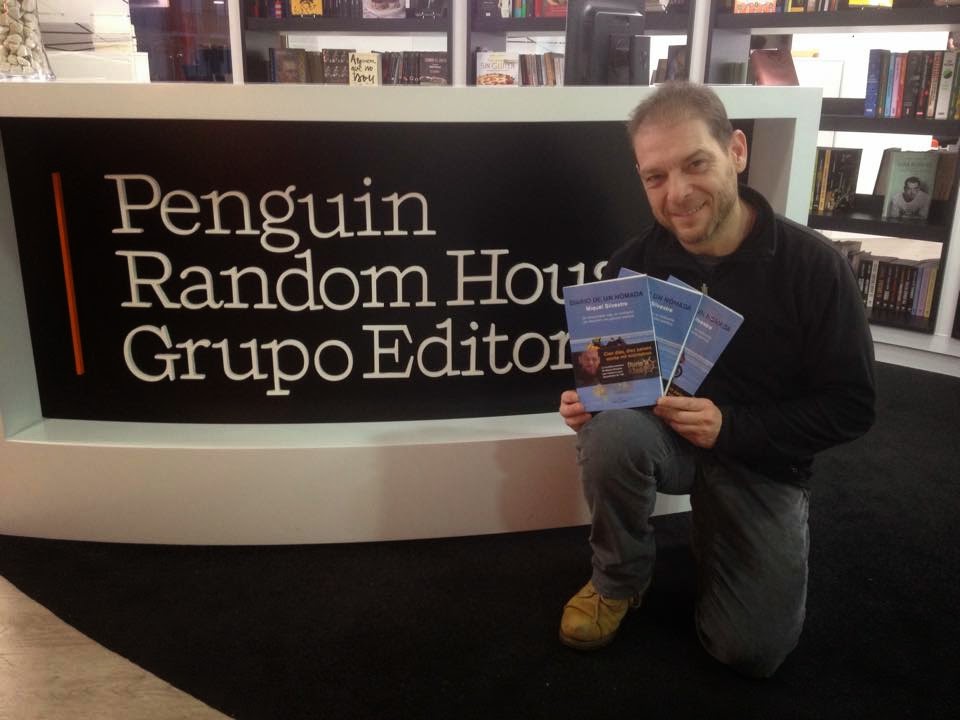 We have said on a previous post that we would like to introduce people to you who lives the life most of us can only dream about. People who inspire us. People who don't only dream, but also DO it. Since one of our main objectives is to "ride the dream", we are keen to introduce you to someone who does just that... the last sentence of his post says it all!! 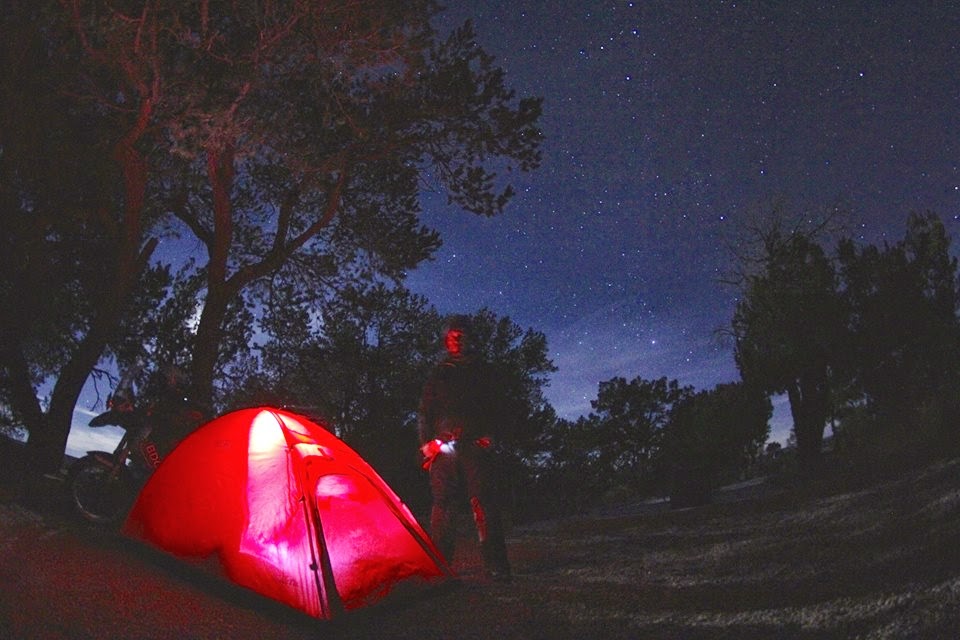 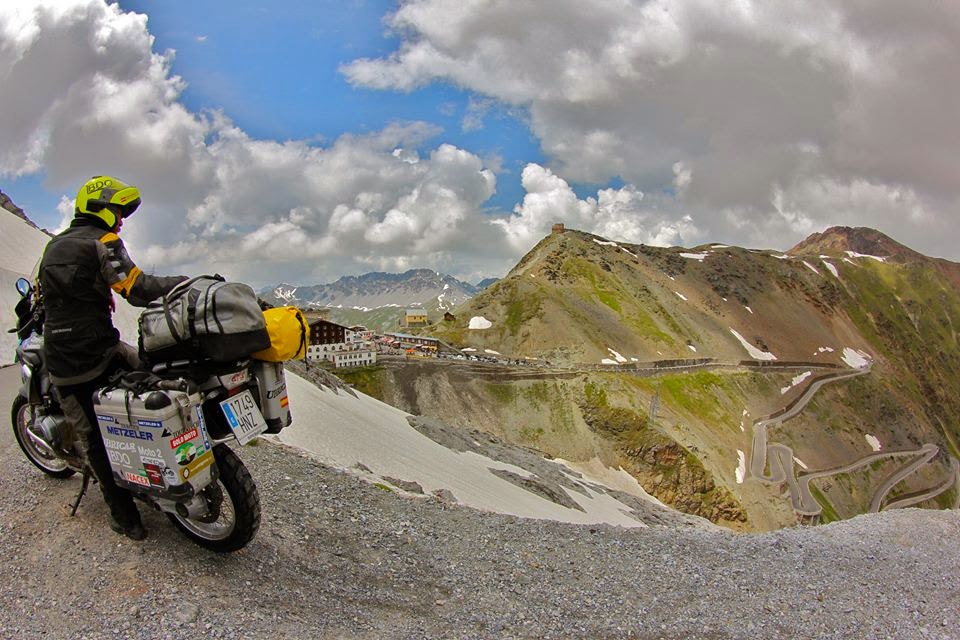 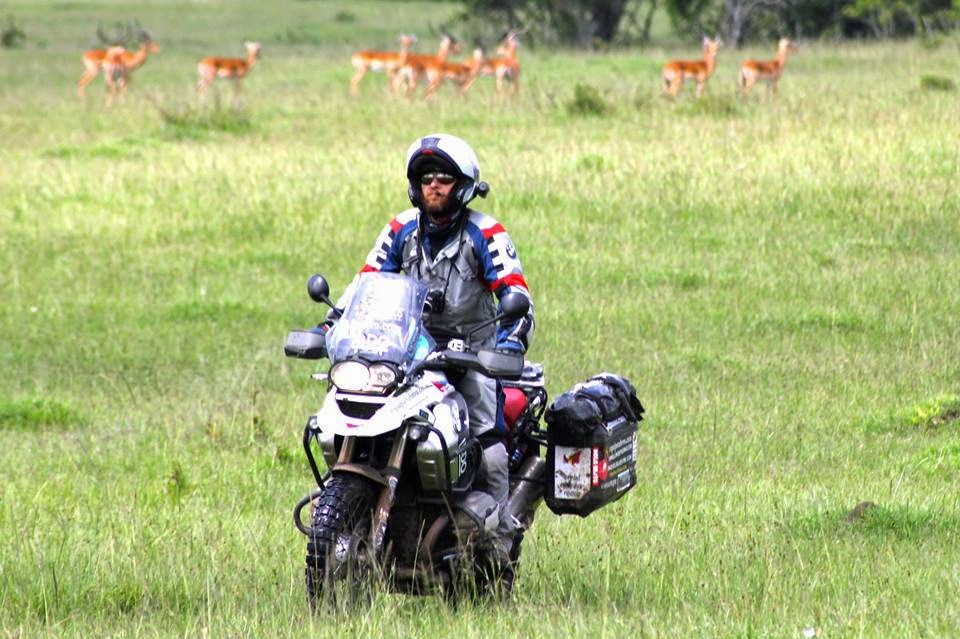 Meet one of the most extraordinary adventurers that have caught our eye (and been prepared to share one of his stories with us). He also has incredible videos so make sure not to miss them!
Thanks and a big welcome to MIQUEL SILVESTRE from Spain.
Here is the story of his Nomadic life (and lovely pics!) You definitely HAVE to go and look here:
Diary of a Nomad 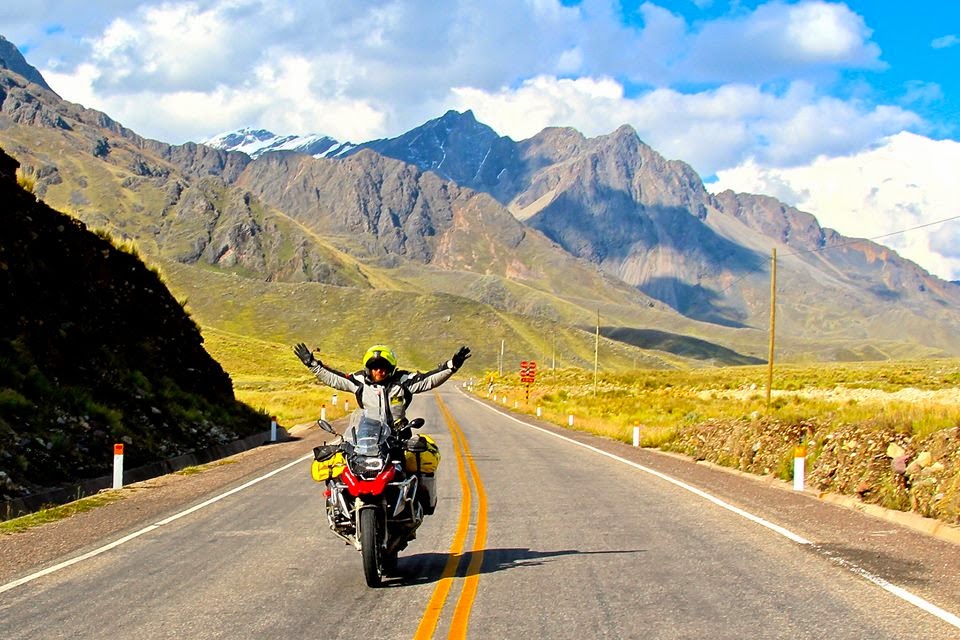 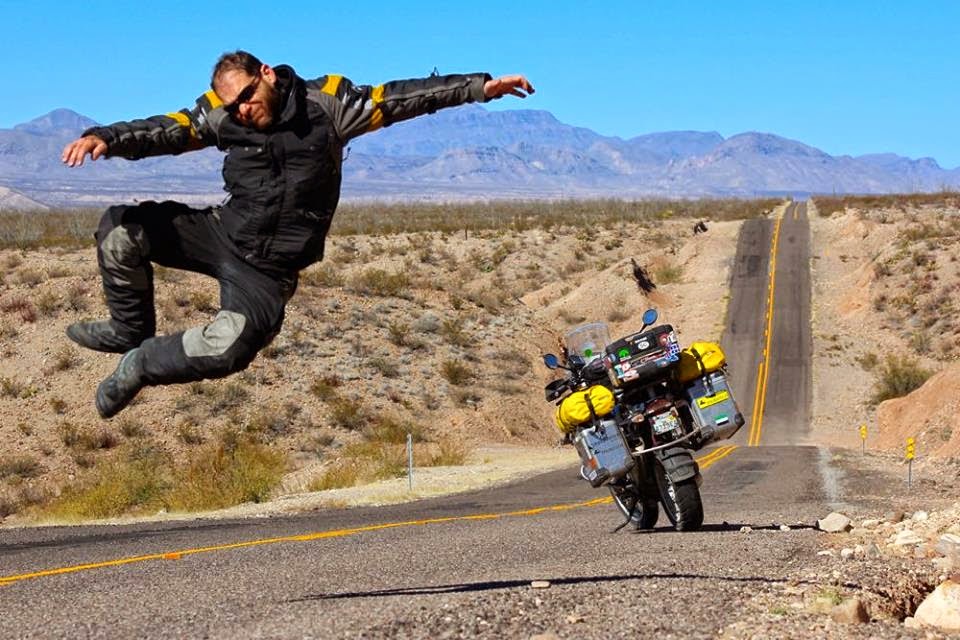 Be sure to go over to his sites and facebook to see more of what he gets up to here:
The adventures
and
Facebook

We have not edited his story and remember to use your translater when on his site. 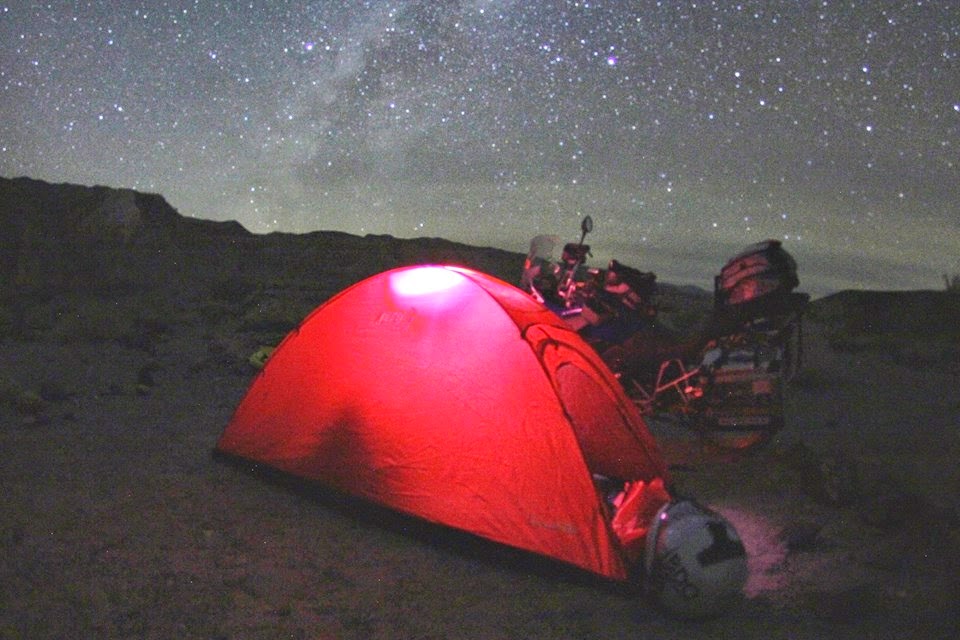 Ancient Mesopotamia is a very interesting destination. But ... is it possible and safe to get there by bike? They say that Kurdistan is stable, the government maintains the security, that things have improved since thenlatest bombings in Erbil in 2004 and 2007. However, despite such a triumphant propaganda, the truth is that the region is experiencing a precarious balance. Turks, Syrians and Iranians do not look favorably upon the birth of an independent Kurdish political entity. Not to mention the Sunni terrorists, willing to blow any normalization of the country.
My arrival in Istanbul coincided with a suicide attack that the government blamed on Kurdish separatists. What will  I  find in the barren eastern tip of Turkey? Military,  tanks, controls. However, nobody bothered me. The police looked  at  the motorcycle as  we  approached the checkpoint with curious but not hostile mood. A greeting and the barriers were opened without   even  asking for documentation. That  had  nothing to do with the police's attitude that  I  encountered in Western Sahara, where the traveler is routinely questioned.
Diyarbakir is famous for  having  the second longest wall in the world, completely surrounding the old city. In the upper area overlooking the Tigris inhabit the poorest. I chatted with three  street sweepers who spoke openly about politics. Its principles were basic but clear: Turkey is the enemy, since  it denied their rights and democracy. As we talked, two police  men  riding their Honda Varadero  approached  us. I feared that   they  will  interrogate  me  why  was  I recording with a video camera. However, they  were  only curious  about  the  motorcyle. They smiled and showed me a  thumb-up, the international sign of approval.


One of the Kurds said they knew a Christian in Iraq called Jan. He said Jan could help me. I asked if  I  could  have  his phone  number. It is always useful to have local contacts, especially when you do not know what you are getting  into. 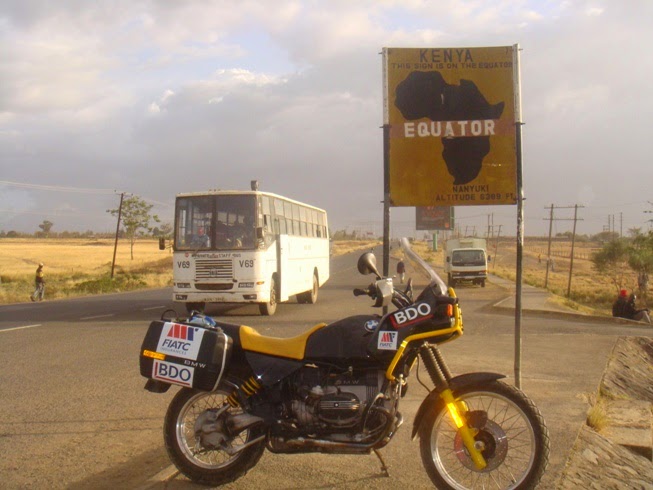 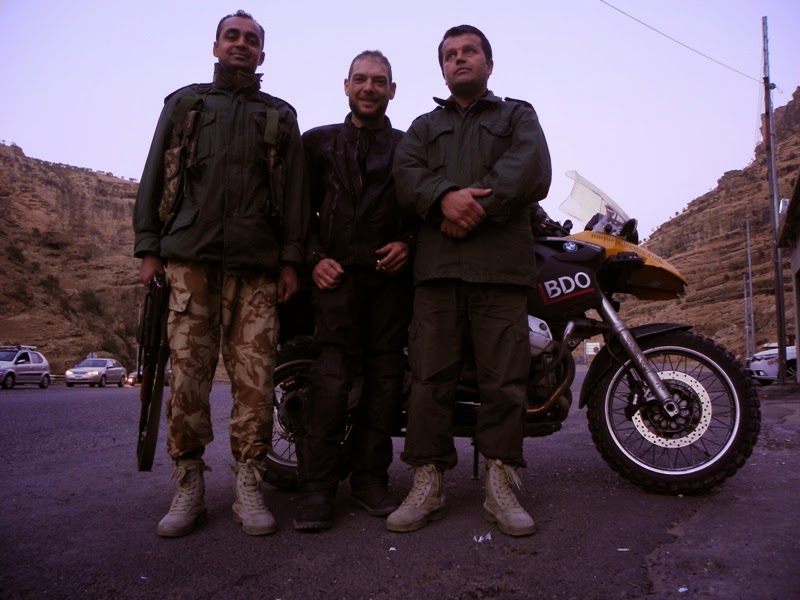 The border post appeared about ten miles from Silopi. The   line  of  trucks  was  endless. That post was the only way of land communication with the West. The Iranian border is not suitable for entering  Western goods due  to the embargo, and the Syrian  border  means  to  cross  through  the  Sunni hornet's nest. My appearance caused astonishment and joy within the Secret Service  members. What  in the hell was I doing there? From where did I come  from? How much costs my bike? Was  I  a  follower  of   Real Madrid or Barcelona?


To  enter  the bike was hard. Kurdistan tries to be a modern state, but repeats  the old bureaucratic schemes of that  region. Slow and incomprehensible  procedures. A mechanic identified the  brand, model, number ofcylinders, chassis, and license  plate  of my  bike. He handed me a document, but when I showed it to leave  Kurdistan, it turned out to  be  insufficient.  I  never  came  to  understand  what  was  missing  or  unnecessary  in  that  document. While waiting, I called Jan, the Christian who was  supposed to help me  out. He told  me  he would come to pick me up, but time passed and  he  did not appear. So, I decided to go to the town of Zakho, which was  just ten kilometers  away. I tried to find   a  hotel and   as  I  walked  slightly disoriented a young man approached me. His English was full of grammatical errors. He was Jan. He had recognized   me at first glance. He  invited  me  to  stay  at  his  house. He  got  as  a  passenger  on  my  bike  and  as  we started to penetrate in the dark alleys of suburban   neighborhoods , it  fired  in  my head  the precaution chip that often can result in paranoia. 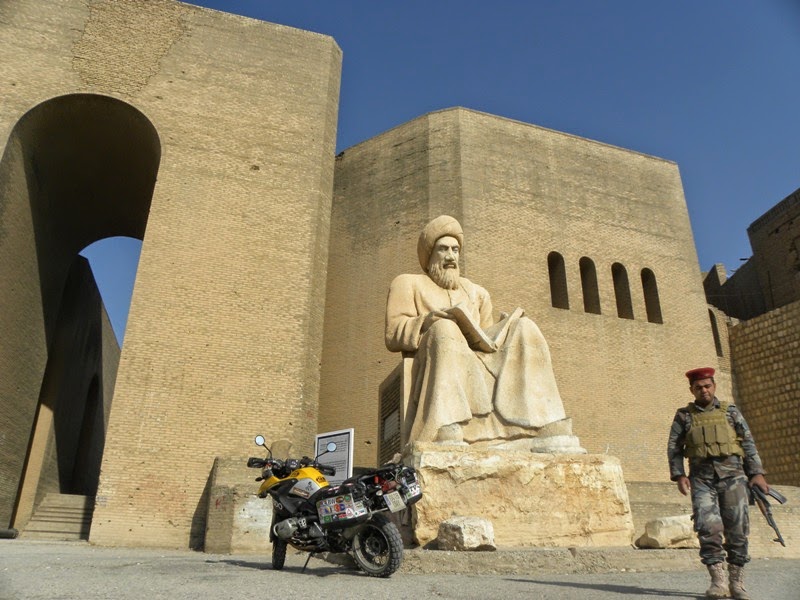 I  reflected  then  that  I  did  not  know anything  about  this guy  at all. I had placed   my  self in his hands without any guarantee that it was true what they said  of  him. Iraq is a country objectively dangerous, no  matter  what Kurds  say  since  Kurds, after all, are stakeholders in selling a security image. I felt that I   did  not controlled the situation,  that  I  did  not  know  where I   was  being  guided  into.


We turned a corner  and left all   city light. The alley was dark and deserted. I stopped the bike in front of a garage  as  he  instructed. Jan got out  of  the  bike and knocked   lightly  on  the  door.  Then  I  thought  that  as  I  enter  the  bike  in  that  garage, it will  actually  be like if I had   been swallowed by  earth. How can I be sure of anything in a country where everything is unknown? What benchmarks did  I  have? Who   did  I  know  over there? Who in the world knew where I was? The metal door opened slowly. My pulse quickened. From inside came out an electric light. And a girl. A  seven  or  eight years old   girl with huge green eyes and a long queue.


She  looked calm even  thought  she  was  probably as surprised as me. Then she smiled and asked   me "How are you?".  "I am very happy to be here" I replied, telling  her the exact  truth. Once  I  saw those eyes so pure and innocent  in  her young  face  I  felt I had come home,   and  nothing bad could wait  for  me  in the place where she came  from

The most striking   part  of the road was   the  terrible asphalt's deformation. The heat, coupled with relentless passage of heavy military convoys, had drawn a wave of tar on the pavement. However, in Kurdistan there was no trace of American soldiers. The guys who meet me at the checkpoints were all young Kurds in  their new uniforms.
They were friendly and talkative. I was  continually stopped and delayed   for a few minutes  to  satisfy  their  curiosity  with innocuous questions, presentations and handshakes. They just wanted to chat and take pictures. Many photos. "Mister, mister, " they said. That was The Word. I was a "mister"and therefore  I was not a terrorist or  a  threat to Kurdistan. Being a "mister" was my best ally. 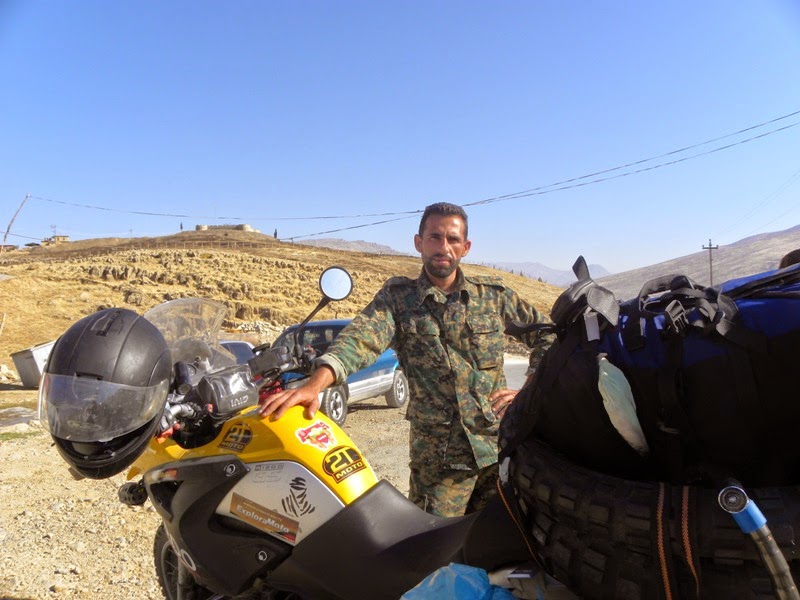 While driving south  I  left behind traffic signs   with  suggestive indications. Baghdad, Basra, Kirkuk ... however,  I  needed  to  pay  attention  to  the  sign  that would indicate me  the detour to Erbil. The Kurds had built a new  road that bypasses the perilous Mosul. The deviation was only 20 kilometers  away from the nest of snakes. 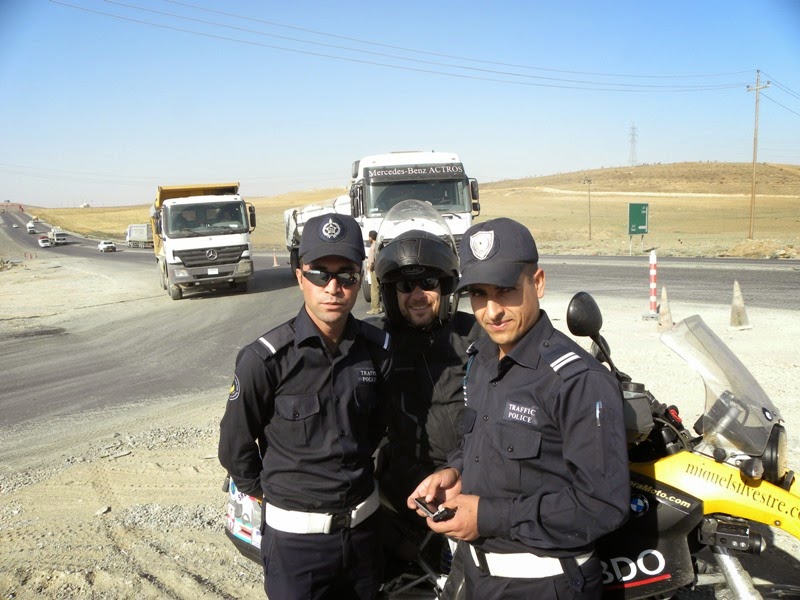 Before entering the Kurdish capital  I had to overcome the  last checkpoint. I was  received  by  a captain who wanted to prove to his men that  he  took  his job seriously. He  requested all   possible  documentation. I   remained calm.  I  knew that it  was  just  a  show-off. The captain noted that it  was  missing a customs' seal. Then  he ordered me to open the suitcases. Something I did willingly and smiling. The best  thing  to  do  in these situations is to demonstrate that nothing irritates you,   that you have more time to lose   than them. 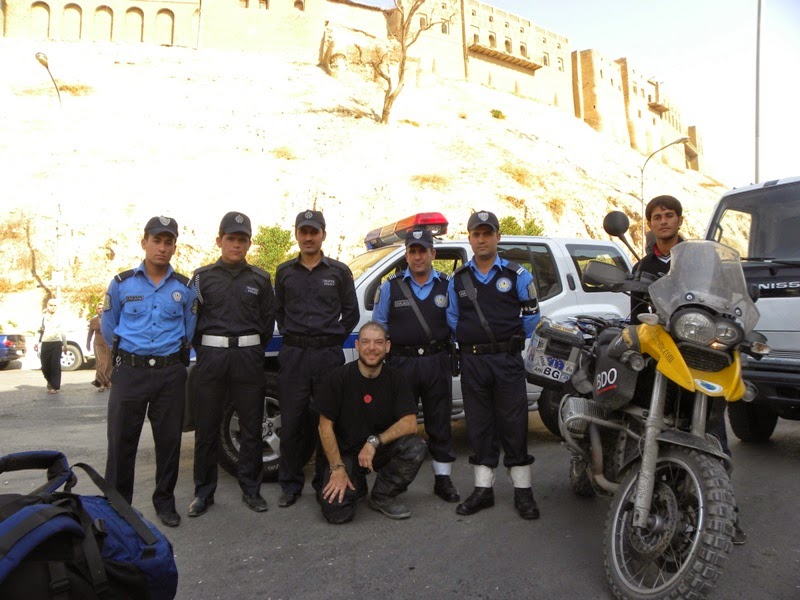 The old town  stood  out on a hilltop in the middle of the  metropolitan  area. The walls were tall and gorgeous. I drove  all the way up and went inside. It was empty. Abandoned, half-ruined but in process of restoration. It  was  incredible to  go  through  that  dead  town. The government had forced the inhabitants to  leave  so  they  could rebuild the neighborhood and turn it into a museum that attracts tourists. 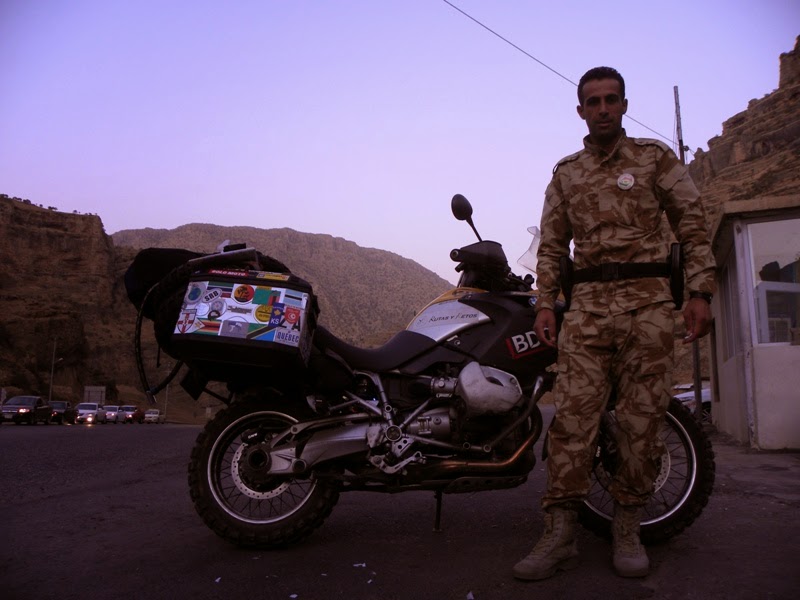 I  needed money and the only automatic  cashier was   located in the Sheraton Building. A Western luxury bunker whose visit requires passing two check  points and a metal detector  arch where they seized my Swiss Army knife. Some USA  executives, diplomats and perhaps also spies. And there  I  was, with my black motorist  uniform. I asked for water in the cafeteria and   I  was informed that a  bottle costs two dollars and a half. So  I  satisfied  my  thirst drinking tap water.

Eastward the region was mountainous, the heart of the country. Deep gorges,  bared peaks, narrow roads, gravel tracks. It  was  getting  dark. I  kept going through  a dark canyon. As  I  reached  a checkpoint the darkness made  it   too dangerous to proceed. The peshmergas  invited   me  into their check  post  to  eat and drink tea. The post was  sand  floor   and a hole in one corner that  served  as  drainage.  I  asked their  permission to sleep with them   but  they told me that a few hundred meters   away was a hotel. A hotel in the middle of mountainous nowhere? It was surreal Pank Resort. An installation of  European cabins.
I woke up in my cabin. The horizon was clear and pure. The eternal mountains, the timeless  sun, the infinite blue. The complex manager told me that day came the owner, who  wanted to meet  me . I was invited to his table. He was an  educated Kurd   who  spoke English very well. He lived in Sweden. From  there  he took the  model  for  the surreal complex at the heart of the Kurdish mountains and just 70 kilometers from the border with Iran, a very unsettled  area that  is not expected to  become  touristic  in the coming years.


The guy was surprised to see me there. He wanted to know the reason why I  had travel to Iraq. It was not an easy question to answer, so I answered   as  I  did  to  the  checkpoint  captain  in Erbil when he asked   me the same question:
- "Do you watch the news on television. " 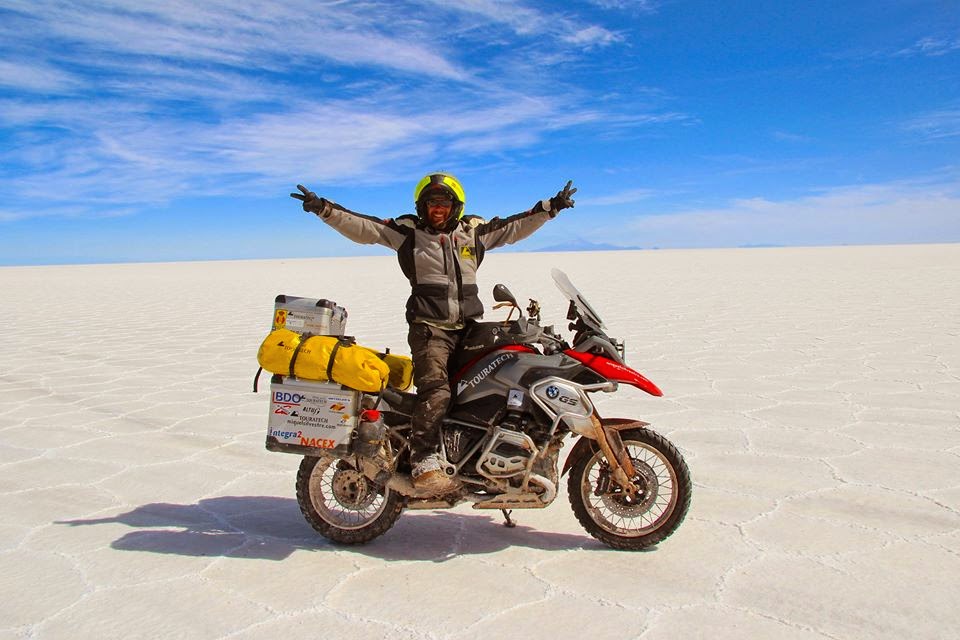