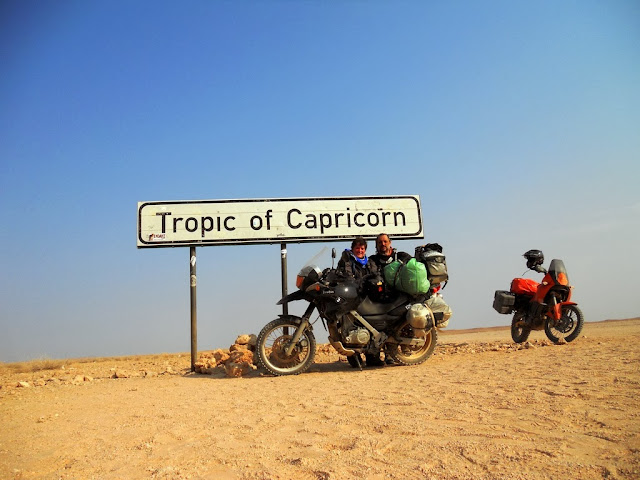 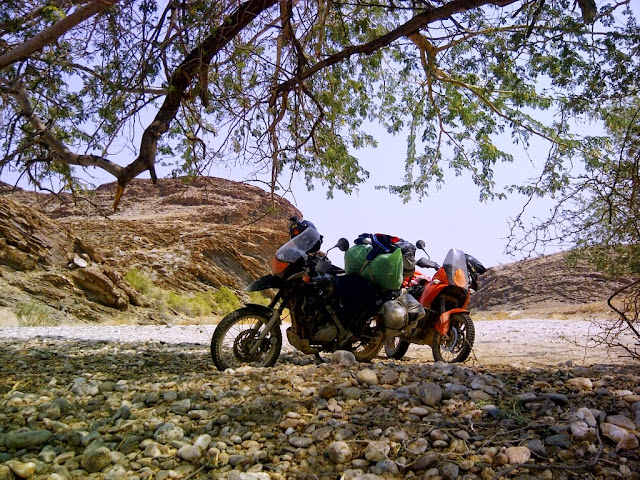 Jinx
Toni
We woke to a light drizzle and chill in the air. Since I did not bother to look out the window before I packed all my stuff (well, to my defence it was 5.30 and still dark outside), I was totally under dressed for the occasion! I asked if we could do the salt road again, as I hoped to get nice pics with the rising sun on the dunes.

We refuelled in Walvis bay which took longer than anticipated. I also decided that today I should use my fuel bladder and bring an extra 7 litres of fuel with. This involved me repacking the bike a few times as I had never used it before.

Unfortunately the light drizzle did not only NOT light up the dunes as I had hoped, but also got my helmet camera wet – resulting in even worse pics once we hit the dusty desert! I am sure by the end of the trip I shall remember to clean the lens regularly!

After refuelling in Walvis again, we hit a wide, lovely gravel road. Almost 4 lanes wide, although the extreme sides were loose sand. Most South Africans can only dream of such a freeway!

The rain cleared up and we continued riding in overcast but dry conditions. Except for some trucks in the beginning and a few cars/bakkies as we went along, the road was relatively vehicle free. A big relief, as every passing thing leaves a cloud of dust. Cough, cough, splutter, splutter! We got into the rhythm with Toni riding alongside me – thus saving us both gulping down loads of each other’s dust.

We later learned that we were on one of the most dangerous roads in Namibia, mainly due to tourists in hired 4x4's driving too fast and then losing control with disastrous consequences. 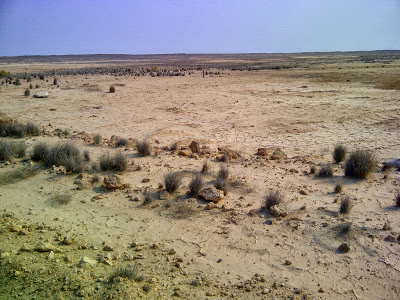 This was an amazing experience – the never ending sand and dunes as far as the eye could see! I don’t believe I have ever been in a dessert before – the beauty and vastness captured my spirit of freedom and even solitude in some ways. There was grandeur in the simplistic surroundings that surpassed of the most magnificent mountains and scenery I had ever seen before. It was in these moments I realized I loved this vast country and have to come back to see more of the hidden treasures one can only see by taking the roads less travelled. How fortunate am I to have a wonderful steed and companions to help me experience these untamed wide open spaces!

After travelling for hours we came to a turn off where tourists were turning off to go look at rock formations. We stopped here and due to the day getting hotter I had to take off my warm inners. This was also a perfect spot to fill up my (super thirsty)Jinx KTM and munch down a few peanuts and raisins.

While riding I would often gulp down loads of water from my backpack and cannot fathom how I did so many hot, dusty roads in the past without it? 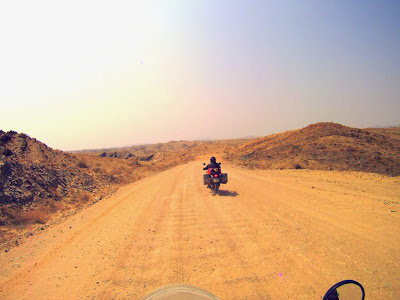 The road started winding between mountainous outcrops and later we found ourselves in the Kuiseb pass. This absolutely stunning pass, took us down into the valley, though most of the way the road nestled in between the mountains. Rounding a bend, I noticed a dry riverbed with some trees in it. The place looked so welcoming that we decided to have our lunch right there. 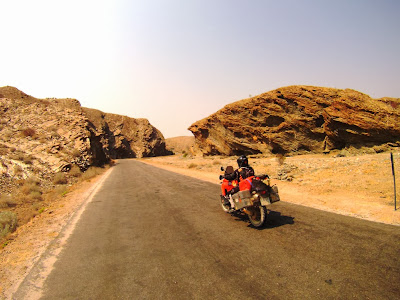 As I turned off onto the sandy track, Brutus could not make the turn (let’s not blame the rider here!) and as he bucked and rebelled against the loose sand and round river stones, I knew we were going down! We came to a standstill a few metres off the little track, still upright and in one piece. Once again I had to take a few moments for my heartbeat to normalize and was thankful we were not picking up dented pieces of Brutus along the sandy path.

Jinx saw a nice spot and decided to pull off, however she forgot she was on a heavy (ok overloaded) bike, on a road with lose sand and round rocks, most of all she forgot to slow down enough. We almost (again) had our first incident on our trip 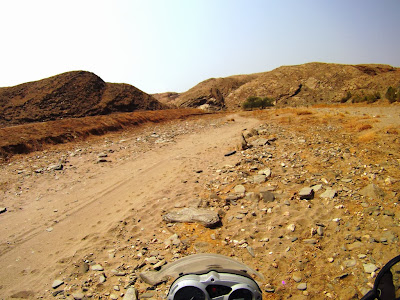 Where I almost bought some costly property


After struggling back, we parked the bikes in the shade of the huge Thorn trees and enjoyed a nice lunch of Game energy drink, Salticax and Oysters. (And Toni had his Espresso of course!). Please tell me how many people enjoy Oysters in the middle of a Dessert, brought in by bike?! My first taste of smoked Oysters, and to be honest, it tasted very similar to the smoked mussels! Then again, I am sure a little sophistication on my part would have helped identify the magnificent difference!

Mmmm, I feel I still need to teach Jinx how to enjoy good food

After lunch we went for a short walk in both directions of the dry riverbed and then hit the road. 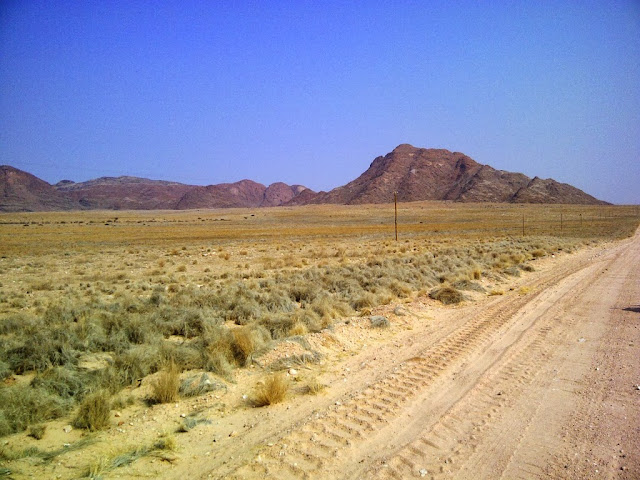 Still winding through the pass, Toni indicated something was wrong with my bike. We discovered the back mudguard had been torn in one place, was loose somewhere else and gone at a 3rd place. The chain guard was also badly ripped. 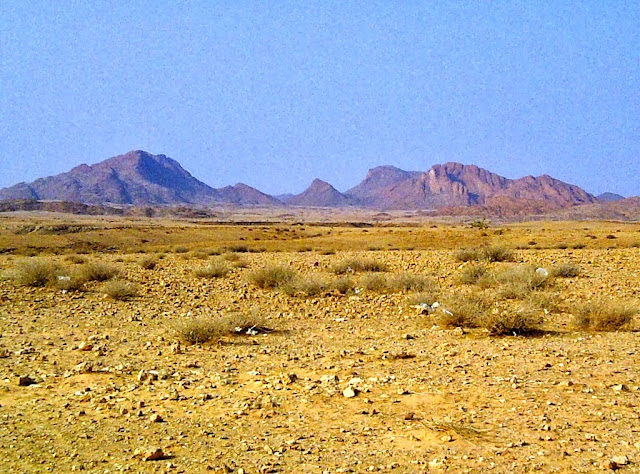 While riding the gruelling passes, I saw Jinx’s bike start to fall apart. Bear in mind Jinx’s bike is actually not an off-road bike, but a road going version of the off road bike. Due to our vertical challenges (yes we are short people) Jinx’s feet cannot touch the ground on the off road version, hence she rides to road version. A “lowered” road version. 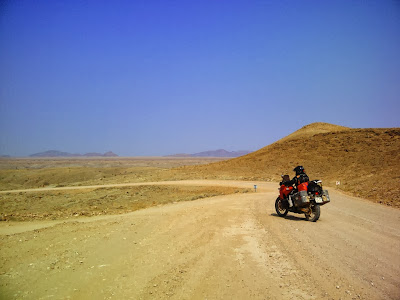 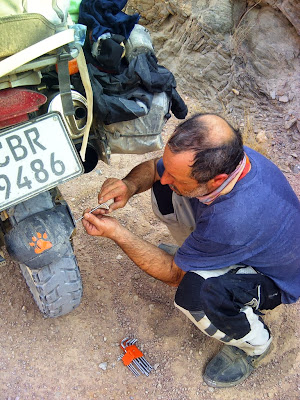 Thanks to my riding buddy, who managed to take it off, reassemble a few pieces and then decide most of it should come home on the bike. So now more time wasted in the mornings having to add all these loose parts to the million straps and cords I am already using! Sighhhh….


Note to self: Invest in hard panniers when you get the money saved up!
And while you're at it: There MUST be alternatives to pasta and Salticax?!
You survived so get used to it Toni


By the time we came to the Tropic of Capricorn, my number plate had almost rattled off due to the bad road. It required some more of Toni’s genius to make a washer (thank goodness for our – empty - tinned Oysters!) and get it fixed – and thanks to the trusty Leatherman!

I hate litter, and therefore always take any refuse I create back with me until I find a suitable place to put it. When Jinx’s bike number plate started tearing loose I created washers with the empty tins and this held for the rest of the trip, and longer.

Everyday we have been arriving at our destinations just as the sun was setting. Due to the extra time it took to fix my bike, today was no exception. The area had slowly changed to a little more vegetation, farms and hills. All in a soft glow thanks to the late time of the day.

We arrived at Solitaire dirty and tired, but happy. I was in time to get the famous apple pie everyone told us to try. Not a great apple pie lover as such, I must admit it was pretty good. The cutest little bakery out in the middle of nowhere?! Now THAT was a lovely surprise! I was actually ogling the chocolate éclairs, donuts and every other sugar-overloaded-fat-induced sin I could see. (I guess?) It was fortunately closing time and I did not have time to choose any sinful delight. In any case, Toni was getting apple pie for me. 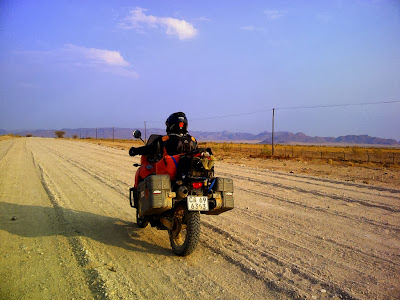 Arriving at Solitaire my first priority was fuel and then a spot for us to pitch our tents. While refuelling we had a wonderful view of a thatched cool lapa, full of noisy tourists drinking ice cold drinks. It was very difficult for me not to ignore my bike and go join that happy crowd and have at least one cold beer. As the sun was very low, I was not sure for until what time the fuel pumps stayed open. Once we refuelled and got our “plot” to pitch our tents, I decided I would treat Jinx to some apple pie. I don’t eat sweet stuff, but heard it is the best apple pie.
When I got back, I was extremely pleased to see Jinx surprised me by getting us 2 beers each. Although it was already getting dark, we both could not wait any longer and somehow our 1st beer just seemed to vanish. At this point I had to insist that the tents go up before we do anything else. We were both, tired, hot and dirty and at this point I could have just gone to sleep in the open.

We set up tents in the setting sun. Beautiful!

We were sharing our power outlet with some other campers and it was fairly late before we could start charging our magnitude of electrical paraphernalia. Little did we know the power (a generator) was switched off at 10pm and most of our “megafters” went uncharged for the next day! But who cares … Apple pie and cuppa soup for supper.  Crashing early once again after a long, hard day, I started loving the feeling of being tired because of what and how I had experienced the day. What a wonderful life?! 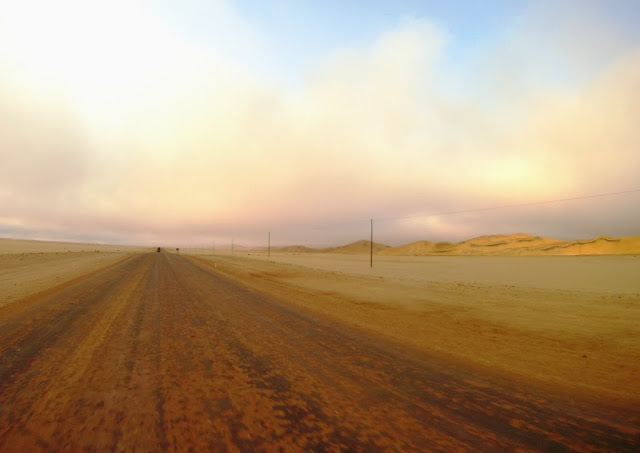 Posted by Unknown at 11:12 pm No comments: Links to this post